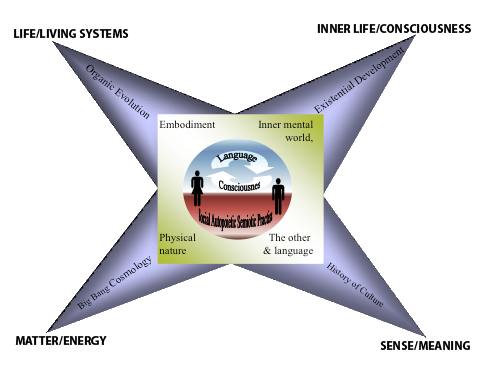 What makes Cybersemiotics different than other approaches attempting to make a transdisciplinary theory of information, cognition and communication, is its combination of four approaches:

1. A physic-chemical scientific paradigm based on third person objective empirical truth and mathematical theory but  with no conceptions of experiental life, meaning and first person embodies consciousness and therefore meaningful linguistic intersubjectivity,

2. A biological and natural historical science approach  understood as  the combination of genetic evolutionary theory with an ecological and thermodynamic view based on the evolution of experiental living systems as the ground fact, engaged in a search for empirical truth, but with no theory of meaning and  first person embodied consciousness and thereby linguistic meaningful intersubjectivity.

3. A linguistic-cultural-social structuralist constructivism that sees all knowledge as constructions of meaning produced by the intersubjective web of language, cultural mentality and power, but with no concept of empirical truth, life, evolution, ecology and a very weak concept of subjective embodied first person consciousness, but taken conscious intersubjective communication and knowledge processes as the basic fact to study (the linguistic turn).

4. A phenomenological (Husserl) or actually phaneroscopic (Peirce) first person point of view taking conscious meaningful experiences before any distinction between subject and object as the ground fact, on which all meaningful knowledge is based, considering all result of the sciences including linguistics and embodiment of  consciousness as secondary knowledge. This includes an intersubjective base in that Peirce considers all knowledge as intersubjectively produced through signs only emotions are Firstness.

The integrative transdisciplinary synthesis is done in two steps:

The first one is to accept two major but insufficient and very different transdisciplinary paradigms as both legitimate:

2. The Peircean phaneroscopic, triadic, pragmaticistic, evolutionary, semiotic approach to meaning, which is leading to modern biosemiotics, based in a phenomenological intersubjective world of partly self-organizing triadic sign processes in an experiental meaningful world.

In the final step the two are integrated in the Peircean framework by inserting the modern development of information theory and self-organizing emergent chemo- biological phenomena as an aspect of semiotic evolution creating the Cybersemiotic framework, where sign process and evolution become the ground reality, on which our conceptions of ourselves, action, meaning and the word are built.

Scroll to the top